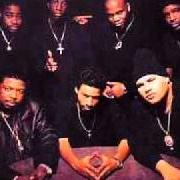 Diggin' In The Crates Crew

DIGGIN' IN THE CRATES CREW

Esta letra es incorrecta? lo cierto es !!
f/ A.G., Big L, Lord Finesse, O.C.
[Big L]
Check it
When I'm onstage you niggaz know who's mic this is
Sport the presidential Rol' full of ice-eses
My name it ring a bid-ell, I'm hot as hid-ell
I live swid-ell, how could you mention Harlem and forget L?
Me and you can get it on, and we'll see who gets shitted on
You tried to do what I did but you did it wrong
I'm not a child, I'm a grown man
You push a Six but I own land, try that
You can't buy that, pass the lye black, let my fry that
Where I rest frontin fly cats get robbed and shot at
Knuckle up, bet I swell you
I stay Rolex-ed and never get tested, so what that tell you?
My whole crew puff blunts and fuck stunts
I won't lie, I got stuck once
Then I seen the kids who did it, cocked my gat and got that back
Now you figure the rest, I'm a stop at that
You still living cause I allowed it, coward
Runing round, fronting hard like you "bout it, bout it"
But I doubt it, doubt it
What I recite be taking hours to write
So if you bite just tell your man what type of flowers you like
[Lord Finesse]
I be that underworld Don, certified bomb
(What you after Pah?) The paramegan and nice swans
By all means my theme is to gross the cream like Joe
"I don't wanna be a player.." I'll just coach the team
Reign supreme, straight and still great
Can you relate? I'm after ill papes like Bill Gates
Don't flip drugs, just a slick thug that gets love
Make chicks bug then take it all off like strip clubs
Too slick, on some ultra-cool shit
On some "You gon' need me before I need you" shit
I got chicks hooked, have your cash shook
"Aiyyo 'nesse, these niggaz frontin and they far from crooks"
Nigga look I've been right, you're skatin on thin ice
I hem mics, this cat's nice like Glenn Rice
Game's tight, so just get the name right
Cause I'll be damned if half you cats can rock the same mic
[O.C. + all]
Yeah, we stand strong, even in the time of crisis
When our man passed on, we still march on
Dignafied, walking with our heads up high

Soldiers til the day that we die, rest assured
[A.G.]
Now while y'all bite like termites, we'll shine like torchlights
Burn mics, truth is I'm better off mics
Get raw like, G.D. on mics of all types
Four mics ain't enough, this royal flush is clutch
Realer than most, stay concealin the toast
But reveal the flames like the last days, there's mad ways
to make the paper, but these chickens taste the vapor
I lace the flaper, wanna be major, that's my nature
I'm forced to kick the dopest shit, load the clip
Let my mind spray, foes submit, it's over wit
Hold my click like the cheebas, drop bombs like bad receivers
You wanna see us? Then beep us, cause we off the hook
I smoke the cheebas and remain here cause they need us
Sell outs, they want to be us, but it ain't here
I blow spots and hold glocks, for those cops
that try to roadblock my road to the top, I throw shots
If you're not, I'm bird hunting in the Suburb fronting
And I been peeped Duke, in the rearview, ain't nuttin
That's what you say, but I say, "It's probably something"
End up frontin, but on another note, y'all MC's
better take it while y'all can get it
Cause where we hit it we gon' rape it
to let you know that D.I.T.C. shitted
[O.C.]
Yeah, yeah, yeah, yeah!
Now who can recall all of the phenomenon is flawless
Like diamonds being dug from a mine, priceless
I am too much for the average man, nigga, who can?
You ain't, fuckin with Diggin' is like walking on quicksand
Shit, my crew will run a blitz on your team
Fantasizing ain't our thing cause we far from a dream
We live and learn concern for one another like brothers
Am I my brother's keeper? No doubt I'm a believer in karma
Which niggaz want to bring the drama?
Fuck with O.C. and get smoked like scarma or ganja
Let me remind y'all once (once)
If I gotta say it twice we gonna find y'all
The way we roll we have teeth chattering, now who's coldest?
Diggin' in the Crates crew, Dignafied Soldiers
[O.C. + all] - repeat 2X
Yeah, we stand strong, even in the time of crisis
When our man passed on, we still march on
Dignafied, walking with our heads up high
Soldiers til the day that we die, rest assured